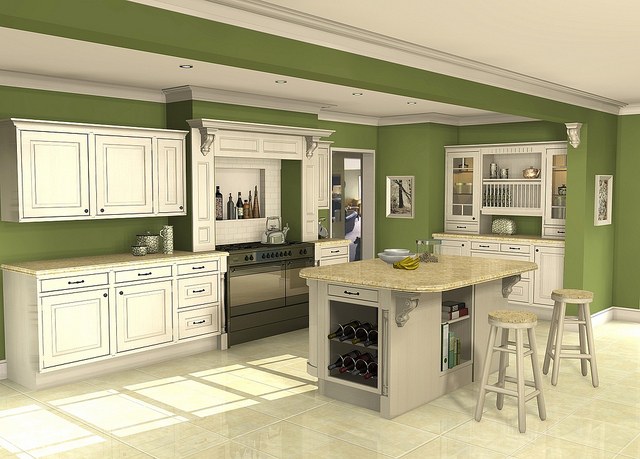 The National Kitchen and Batch Association makes it a point to survey all of its members to find the latest and most popular trends making their way to designer kitchens in America. The survey is significant because almost every one of the designer kitchens sold by these members are trend setters. Many of these designers export their ideas to as far as Australia, so any new trends identified in North America automatically means that it’s a new trend in Australia and Europe too.

However, broadly each trend identified below will not be available in each local market around the world but these trends are what we should watch out for in 2014 and beyond.

Trend no. 1: All white cabinets

There were many designer kitchens in 2012, 2013 and in 2014 which will continue to feature white painted cabinetry. As a matter of fact white has become increasingly popular over the past couple of years which means that it was no fad something that some experts thought it was a few years back. According to the survey the popularity of designer kitchens with white painted cabinetry is more than 67%.

There are an increasing number of Australians too who are opting for white kitchens but the exact figures have not been complied yet.

The use of dark and natural shades have been consistently used by kitchen designers for over five years now. Around 30% of designers are using light shades while medium shades are used by 54%. Glazed finishes are making up around 44% of kitchen finishes. However, in 2014 it will be interesting to see if the number of people who opt for darker finishes increases overall all.

An increasing number of people both in North America and Australia are preferring colored glass splash backs as compared to wood or metal splash backs. The number of designers utilizing glass grew by 42% since 2010 and this trend is expected to grow by another 5% in 2014. The other type of splash back which is expected to make its way to many kitchens in Australia are the more expensive natural stone splash backs, while porcelain and ceramic may not be as popular as we head into 2015.

Perhaps the reason being that ceramic and tile do not fit in well with how people want a modern kitchen to look.

Many of the latest designer kitchens are now featuring touch sensitive faucets. According to the NKBA’s survey 32% of their member designers are using these faucets as part of their designs. However, pull out type faucets are till retaining their top position mainly because they look great but are cheaper to install and replace. In second spot is pot filler type faucets the use of which does not seem to grow despite these faucets now available in an array of designs.

There are a number of strange looking faucets that are making their way into kitchens and the trend will continue through 2014. The latest types of faucet which we belive is also the most beautiful in some respects is the oil rubbed finished faucet and the nickel chrome faucet both of which are featured in some of the most popular designer kitchens.

However, leading Italian kitchen designers like http://www.mitonkitchens.com.au are working on introducing a number of strange looking faucets which are both cost effective yet will make your kitchen stand out from the rest of the designs you see. But these faucets are purely optional and there is always the option to use a traditional one.

Mark is one of the leading experts on designer kitchens in Australia. He is a kitchen designer himself and has designed hundreds of kitchens over the years. He draws his inspiration mainly from Italian and French kitchens that maximize the use of space. This in his opinion is the future of kitchen design.