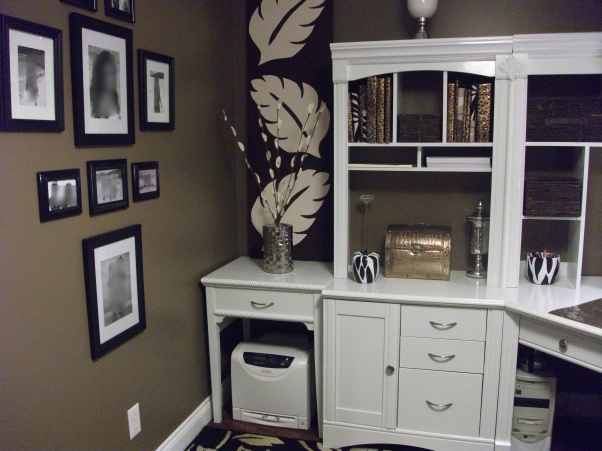 Just over a year ago I launched on a major revamp of my home with the aim of transforming the interior from top to bottom. As with most things in life the project has not moved at quite the pace that I had anticipated and there are still a few rooms to tackle. Having just completed the hall and landing I now find the office is beckoning but I am struggling to formulate a plan. What does make a good home office?

Well I guess that a good starting point would be a tidy and organised space to provide an uncluttered room in which to work. On this point I am currently exhibiting an epic fail as my office looks like the aftermath of a tsunami. My decorating project has been temporarily stalled by the need to complete end of year accounts and in the absence of anywhere better to store them, my files are spread all over the floor. There will be no decorating until that lot is shifted as I can only just gain access to the room.

Once I can move freely once more I must evolve a plan for the room. I already have very presentable glass and chrome desks which should stay but the rest of the space is populated by a mismatched hotchpotch of furniture and shelving which gives the room the appearance of a second hand furniture dealers. My principle task will be to locate cabinets and shelving which complement the desks. It is also time to relieve myself of the numerous books inhabiting the shelving. I have a Kindle for God’s sake so why do I still have so many books? The whole point of the new technology is to streamline your life but all I have done is upload new books to the device whilst retaining the clutter I already had. Frankly it would be a miracle if I could find the Kindle at the moment!

My biggest frustration surrounds choosing a colour. Conventional wisdom says that the office space should be painted in calming and unobtrusive shades like light green but I don’t really do drab and I don’t want it to end up looking like a hospital. I have this terrible urge to go bold and to partner the metallic look of the desks with sparkling silver walls and a feature wall of shocking pink! I want to create something funky and different for my workspace but if I am not careful it will all end up being a major distraction and I won’t get any work done at all. Perhaps my glitter ball should stay in the cloakroom (yes I have a glitter ball in my toilet!)

I think I am going to have to compromise. Perhaps grey walls with a bit of silver sparkle and a few bright accessories and homewares to lift the space. You never know the glitter ball could even make an appearance if I ever get started. In the meantime I write this surrounded by mess and using two files as a footstall because I don’t have anywhere else to put them. That calming workspace seems a long way off!

Sally Stacey is a keen writer with a very messy office wo needs a clamer space to work in!