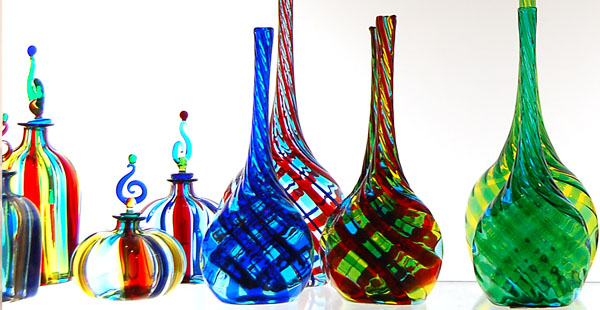 As a process that dates back over 2,000 years, it is remarkable how glassblowing has stood the test of time. The process, which involves using air to inflate molten glass, has changed remarkably little since it was first pioneered in the days of the Roman Empire and before.

In fact, the very first glassworkers to discover the technique had actually uncovered a property of glass previously unknown. The property is that glass, when molten, is viscous enough to be blown into shape as a result of its liquid atomic structure. Rather than being packed as densely together as in a typical solid, the atoms in glass are held together by chemical bonds in a disordered network. This means, when heated, glass behaves as a very viscous liquid, allowing it to be blown into shape before hardening as it cools once more. Furthermore, this cooling occurs at different rates, depending on how thick the layer of glass is. Thinner layers cool faster than thicker layers, allowing for the production of uniformly thick glass and no damage to thinned layers.

There are two prominent methods of glass blowing: free-blowing and mold-blowing.

Free blowing was the very first technique, pioneered in the 1stcentury BC. Whilst it is still used today, it is used largely as an art form rather than in industrial settings. The process involves heating glass, which is spooled on the end of a blowpipe, before blowing short bursts of air to inflate it into a blob. Once inflated, the glassworker then moulds the molten glass into its desired shape before allowing it to cool and harden.

The process is labour intensive and low volume, although a skilled worker is able to produce high quality artifacts of almost any shape or size. Hand blow glass products are therefore rather expensive when compared to their mass produced cousins.

Mould blowing was invented shortly after free blowing and employs largely the same principles. The glass is placed on the end of a blowpipe and inflated in the same way as in free blowing, but is then pushed into a mould in order to be formed into the desired shape.

Mould blowing quickly allowed for glass products to be manufactured in far greater volumes as there was no requirement for the careful shaping of glass by a skilled worker. The very first mould blown glasses were early examples of mass production.

Today, glass blowing is a relatively high volume manufacturing process. Between the beginning and the end of the process, each glass work piece passes through three separate furnaces.

First of all, a blowpipe is dipped into molten glass, allowing a blob to form, ready for working. The molten glass is rolled on a flat sheet of steel, known as the marver, which forms an exterior skin on the work-piece, before air is blown into the glass to inflate it.

Once the glassworker has added enough extra material to increase it to its approximate final size it is transferred to the workbench for shaping. The glassworker then has a number of tools at his or her disposal, including paddles, tweezers, shears and blocks all designed to cut, mould and shape the glass piece. During this time the glassworker also adds patterns and colour to the glass if desired, through several innovative techniques. During this period, if the glass begins to cool and harden, the glassworker can reheat it in another furnace, known as the glory hole.

Outside of industry, glass blowing has become an art form, with dozens of high culture studios around the world producing glass artists who mould and shape glass into complex pieces. These pieces of art require an entire team of glassworkers collaborating to form intricate details and elaborate designs. The artists gather together in small studios, with small furnaces and work quickly and elegantly to complete their designs.