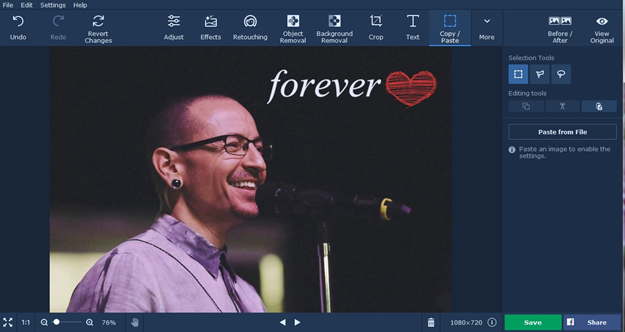 One of the most common modifications that are done to images shot by people from around the world is adding captions. Maybe you want to add a title or maybe you are just interested in making the photograph funny through some text that perfectly matches the image. No matter the case, adding captions is something that may be of interest for you.

The problem in most cases is that captions need to be added to numerous images. This will take time if you take it one at a time, they are different and you waste a lot of time because of the steps that you have to follow. Fortunately, there is a much easier way to add text to photos through the use of Movavi Photo Editor, a rather interesting photo editing program that is quickly gaining a lot of popularity among regular users and even professional photographers. Here is an example of something done in just a couple of minutes (including image opening and saving):

In order to highlight how easy it is to add great caption to an image with Movavi Photo Editor, let’s think about the steps you have to take when you use the software:

What should be mentioned about Movavi Photo Editor’s caption tools is there are basically dozens of options that you will want to consider when you edit your images. The possibility to edit the captions as you see fit, choose out of thousands of fonts, easily modify sizes and basically all that is included will need to be considered since everything is so much simpler and faster than what most people think.

Movavi Photo Editor does seem as being a very simple software that does not offer much but you are going to get this idea simply because of how well it is designed and how simple it is to use basically all the features that are available.

On the whole, we are looking at a program that should be considered since it offers much more than just adding text. You would be able to use this program to make really advanced image edits like removing backgrounds and adding makeup in just a few minutes as opposed to much longer if you were to use professional software. Movavi Photo Editor was created with the user in mind and it is great to see that many fast and useful tools and features are included in a program that is much cheaper than the competition.