Can Changing a Ceiling Fan’s Direction Help With Heating Cost?

Most everyone will agree that using a ceiling fan during the summer will have a great affect on helping a room feel cooler and more comfortable. When used in conjunction with a home’s air conditioning system they will also help to save money on the cost of keeping a home cool.

What most people do not realize is how beneficial a ceiling fan can be to even out room temperature during the colder months. They are even more useful in homes with soaring cathedral and vaulted ceilings. Warm air rises due to the cooler air being more dense and settling at the floor level. As the heavier cool air falls to the floor level it causes the heat in the room to be pushed upward, and eventually trapping most of it against the ceiling. The higher the ceiling, the greater the heat trapped up top near the ceiling.

By using a ceiling fan in its reverse setting we can reclaim that lost heat by bringing it back down to the living level where it can be more useful. This helps even our the temperature in our homes while the heating system is off between cycles. In return, a using a ceiling fan the correct way will help with heating cost. This is especially true with modern ceiling fans that use a DC motor, because a DC ceiling fan motor only uses about 1/5 the electricity to operate on low speed, when compared to a overhead fan with a traditional AC motor. A DC fan also has 6-speeds (or more) versus only 3-speeds from traditional ceiling fans. With more speed variations it is easier to customize the perfect speed for individual needs.

Fans Should Move Air Upward During the Winter 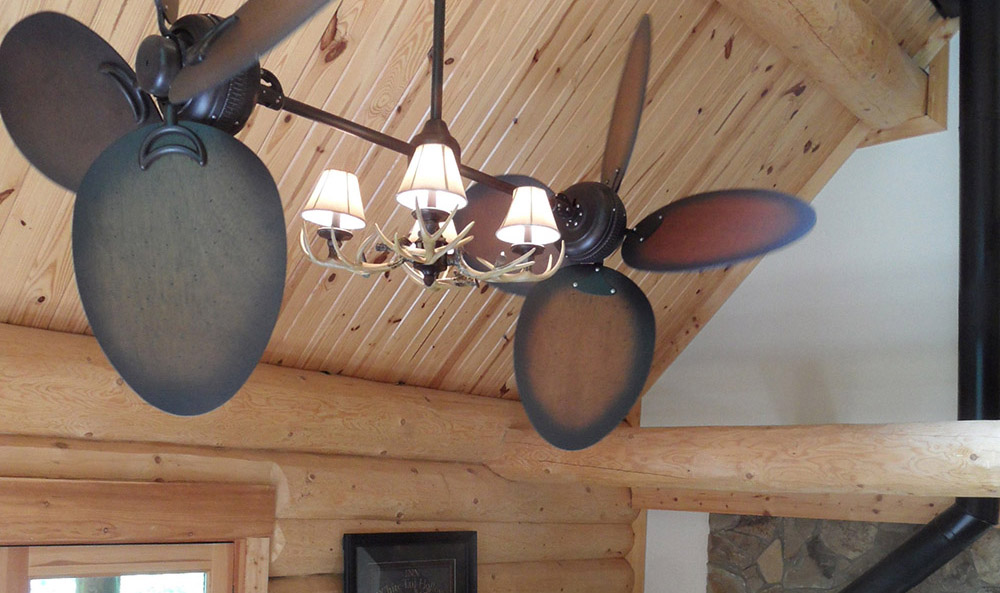 With exception to a large double ceiling fan, such as the one pictured above, in order to benefit from a ceiling fan during the winter months, you first have to know which direction the fan should be rotating. Because ceiling fans cool by the wind-chill method, the last thing you will want is to have the ceiling fan blowing downward and causing wind-chill into the room.

To avoid this, most all ceiling fans have a reverse setting. This causes the blades to spin in the opposite direction, thus moving airflow upward. When a fan moves air upward, it forces the trapped warm air back down from the ceiling to the floor level where it can be enjoyed for comfort in our homes.

Not only will you want to reverse your fan to move airflow upward during the winter, but you will also need to remember that in most cases the lowest speed setting is all that will be needed to do the job. If your fan is spinning too fast, the wind may reflect off of the ceiling too fast and, although the fan is blowing in the opposite direction from the summer mode, it may still cause a wind-chill effect when running too fast. Therefore remember, slow is best for winter time usage.

The answer to this question is clockwise during the winter. However, many people confuse clockwise and counter-clockwise when looking up at a ceiling fan. I think this confusion comes from looking upward and at sideview angles at the same time. To be sure you are seeing the direction correctly, set your ceiling fan into what you feel is the clockwise direction, then lie down on the floor directly beneath the center of the fan and look straight up. If you are still seeing a clockwise rotation, then you are all set. If not, simply reverse your ceiling fan’s direction again so that you see it as spinning clockwise while lying down directly under the fan.

Just remember, a ceiling fan should move airflow upward for winter time use, and if the airflow is moving upward you should not feel a breeze directly below the fan blades. If you feel airflow blowing down on you while standing underneath the blades, your fan is moving counter-clockwise, which is only intended for cooling. All fans are the same when it comes to the direction for winter and summer, so don’t think you have the only different model made.

Can the Styling Affect the Direction?

The only exception would be ceiling fans with dual motors. A dual ceiling fan is a ceiling fan with a motor on each end of a horizontal shaft, with fan blades spinning at each motor. But, even with the majority of these fans the motors are tillable. Therefore, although you may not physically reverse the fan motors’ directions, you will still tilt the motors so that the blades are blowing airflow upward for use in the colder months. That said, once the motors are tilted to blow airflow upward, and then you lie beneath the fan and look up, you will still see that the blades then will be going clockwise.

Ceiling fans are beneficial in helping keep room temperatures warm in a home during the winter months. DC motor ceiling fans are best at doing this because they have a slower low speed, as well as more speed variations to reduce wind-chill effects, and they also cost on average 1/5 to operate compared to traditional ceiling fans with standard motors.

As I wrote this article I found most of this helpful information from a combination of three different online specialty shops. Modern Fan Outlet, Palm Fan Store, and http://www.ceilingfantastic.com. I also called each and spoke to their customer service reps, all of which were very friendly and helpful. Most importantly, each rep told me the exact same thing about how to use a ceiling fan during the winter.