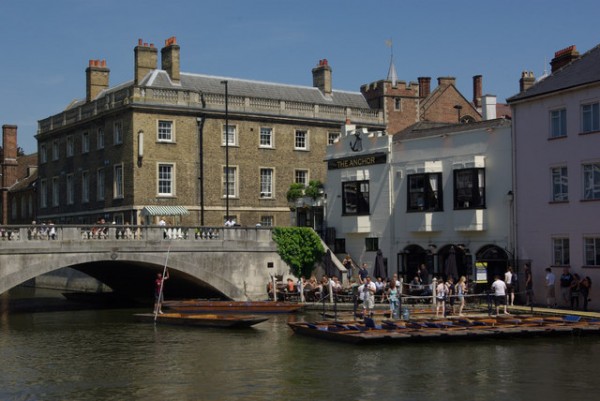 Cambridgeshire is the home to some of East England’s prettiest villages. It sits comfortably in the middle of an area encompassing from North round to West the borders of Lincolnshire, Suffolk, Hertfordshire, Essex, Bedfordshire and Northamptonshire.
With its rolling meadows and valleys; rushing streams and rivers; bustling markets and lively country pubs and inns, to its stately homes and aristocratic grandeur; majestic Cathedrals and Churches, Cambridgeshire has so much to offer. It is a pioneer of prettiness.
Here are some of the prettiest villages in and around Cambridgeshire.

This quaint village has Peterborough and Cambridge to its North and is only two miles away from picturesque Huntingdon and St. Ives. The River Ouse flows past all three of these villages but has a lock at Houghton that is an ideal spot for walkers and picnickers alike. It is full of natural charm and beauty.
Houghton is known for its mill, a feature that has been a part of the village history since before the Norman conquest in the 11th century. There is also the Clock Tower that stands in The Green, built in 1902. It still runs like clockwork but has to be wound up weekly.
The village may be small but it has lots of character, with its historical reaches and its stone and thatched cottages and houses. Its location means it is on the way to other towns and villages, so a perfect place for a pit-stop if driving through. With detached house prices averaging around £360,000 it can also be a perfect place more permanently. A home that sits in pretty peacefulness alongside other neighbouring, idyllic villages, all of which are within walking distance via the scenic network of footpaths across the countryside.

The village of Huntingdon is certainly one for all seasons, with its riverside walks, boutique shops and traditional markets, and welcoming cafes, bars and restaurants. Like Houghton and Wyton, it too has its own heritage story as the birthplace of Oliver Cromwell.
Chartered by King John in 1205 it grew firstly as a bridging point of the River Ouse but then became a charming market and coaching town by the eighteenth and nineteenth century. The medieval bridge over the river is incredibly well-preserved and is still in use today on Ermine Street. Its stone arches leapfrog across the river and it is a beautiful spot for photographs, especially with the river’s mirror-like reflections.
The best way to see all of Huntingdon’s charming sights and scenes is via the Historic Town Trail, a circular walk from the Town Hall past war memorials, old gaols, markets, the 16th century Falcon Inn (used for Cromwell during the Civil War), and All Saints’ Church with its Norman stonework. There’s also Riverside Park with the 19th century mill, a popular place for relaxing strolls or picnics or ambling boat trips along the River. The Mill is a property of the National Trust and flour is still milled here, powered by the water.
Huntingdon is a treasure trove of all that is quintessentially English, and with its main train station it is only one hour from London. Next to the peace and quiet of the river and historic walks, or the jostling of farmers’ markets, is the thrill and excitement found at the Huntingdon Racecourse, only five minutes away. Set in the heart of Cambridgeshire’s countryside it offers some spectacular views as well as the spectacle of the races.
Huntingdon offers a delightful array of sights to see – it is a pillar of prettiness in Cambridgeshire.

In 2013, Hemingford Abbots featured on the shortlist of The Times’ Best Places to Live List. The criteria for receiving such a title included natural beauty, transport links, low crime rates, and property prices – which actually average at £678,000.
Much of the village is a ‘Conservation Area’ and so is known for its views of the river and its walks through mellow meadows. It is dotted with thatched 16th and 17th century cottages and barns which all add to Hemingford’s pretty character.
There is also the grandeur of the Manor House, Old Rectory and Hemingford Park, not forgetting the Church of St Margaret of Antioch. This Grade I listed building with its stunning spire is a known landmark of the Ouse valley.
It’s not just its buildings and scenic views that make Hemingford Abbotts so pretty but also its community spirit. There is an annual regatta, over one hundred years old, where the river becomes alive with rowing boats, canoes and punts. The Flower Festival also paints the village with a colourful palette in June when there are open gardens and afternoon teas, all in the warm haze of summer afternoons.
Like most of Cambridgeshire vilages there are a number of public footpaths that reveal the hidden splendours of East England’s rural and riverside beauty. Most of these are flat preambles but there are more challenging walks for the more adventurous stroller.

Wisbech is the capital of the Fens, Cambridgeshire’s flat expanse of beautiful marsh land and one of the most distinctive areas in England. It is the perfect place to unwind and relax.
With a population over thirty-one thousand, Wisbech is the second largest town in the region. The River Nene runs through it making it an in-land Port Town; it lies only 11 miles from open water. In this corner of charming Cambridgeshire, agriculture flourishes and thrives. The surrounding countryside is well-maintained and cultivated.
What also shapes Wisbech’s pretty Georgian character are the number of period buildings, one of particular note is the Peckover House and Garden. Its ornate and period carvings and panelled decoration inside are a testament to the town’s historical grace and virtue.
Alongside its rich agricultural way of life is Elgoods Brewery and garden, a family brewing business that has made the finest ale for over 200 years. Regular tours and beer-tasting events are held here, in case you wanted something to wash down all of Wisbech’s picturesque delights with.

Of course, you can’t have Cambridgeshire without Cambridge, a beautifully historical town built on the foundations of many well-known and prestigious colleges and universities, whose corridors have been walked by the likes of Sir Isaac Newton and Stephen Hawking.
Cambridge is undoubtedly a popular tourist destination due to its educational heritage. The oldest colleges face away from the River Cam but their lawns lead down to The Backs, an area renowned for wistful wonderings and relaxation beside the river, or perhaps some merry amusement at visitors trying their hand at punting down-stream.
With its spires and steeples of many universities and churches, Cambridge is simply a beautiful town. The rolling luscious green lawns, shaded by whispering beeches and the gradual knocking of punts along the river can loll anyone into a state of peace and tranquillity. It is a pretty wonderful part of Cambridgeshire and worthy of sharing its name.
Simon Armitage is the Managing Director for Cambridgeshire’s leading Estate Agents- Morris Armitage. Simon opened the first branch in 2002 and have since sold and rented thousands of properties in Cambridgeshire and beyond.