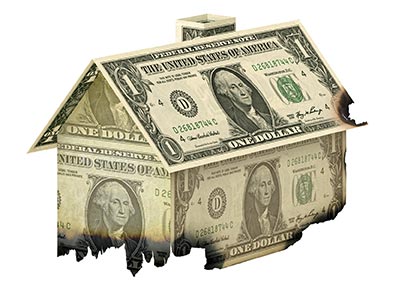 Real estate agents aren’t necessarily lumped into the same category as used car salesmen or personal injury attorneys, but there is reason to be equally wary when buying a home. Sure, they can rattle off the square footage of your prospective home to the inch, walk you through securing a mortgage and might disclose that the house lies directly on an earthquake faultline, but there are a few issues they might not mention. Let’s take a look at a few…

Your House Has a Pest Problem

One word: termites. Fact is, invasive insects can make themselves right at home, right under your nose. It’s been estimated that the little buggers cause up to $5 billion dollars in damages to homes per year, which almost puts the destruction costs on par with hurricanes.

But this? This is bad.

Once structural damage is visible, you’re in deep trouble. Termites generally prefer softer subfloors to the hardwood top layer of flooring, but if it’s made of wood, they want to eat it, simple as that. Inspectors will generally give you the straight story, but don’t expect your real estate broker to be as up-front. Even though not disclosing a problem like termites can get them into legal trouble, disposing of the pests is always a major undertaking.

You’re Sitting Atop Something Risky

Like an active volcano? Well, unless you live in the Yellowstone vicinity, probably not. But there are plenty of other undisclosed dangers that may be beneath your new dream home. Like…bodies, perhaps? Building on top of ancient native burial grounds, or an old family plot, sounds like a movie-land cliché, but this seriously does happen.

Sinkholes are SO SCARY. Not to mention highly mysterious…

Toxic mold, a pack of badgers, radon gas, pipes on the verge of bursting…there are a lot of alarming subterranean pitfalls out there. Miniature landfills, which eventually turn into sinkholes, are extremely perilous and quite common. Buried oil tanks, of the rusty and leaky variety, are also frequently unearthed. For the record, many of these hazards can be revealed with a simple metal detector. But make sure you’re asking the right questions.

“Are they like…BBQ-ing tires out there?!”

Uh-oh. “There goes the neighborhood?” Nope, they are the neighborhood – and you are, quite literally, the new kid on the block. You’ll want to make sure you’re familiar with who you’re moving next door to, but within reason, of course. Introducing yourself with a platter of baked goods is great, if a bit antiquated, but don’t do it the day you attend the open house.

The point is, if your new neighbors are prone to all-night stag parties or nude sunbathing, don’t expect them to change once they have a new neighbor. If you already bought the place and just noticed that they appear to be running a puppy mill out of their backyard…well, might I suggest some blackout curtains and earplugs?