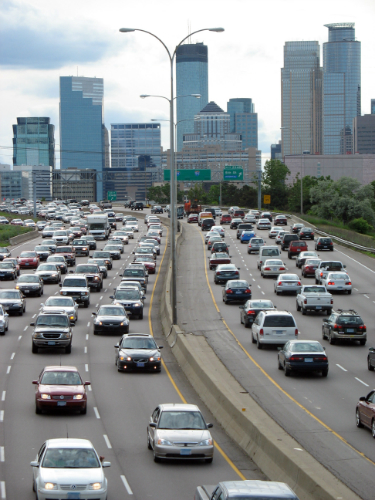 Americans will put up with anything provided it doesn’t block traffic. –Dan Rather

Every driver understands the frustration, anger, and stress caused by being stuck in a traffic jam on the highway. What would otherwise be a 20-30 minute commute can elapse into a 1-2 hour epic test of patience and determination. When you think of road rage setting in, typically highway traffic is often both the catalyst and cause of that. Highway traffic is unnerving. You are in a machine meant to travel, and obviously you’re intending to go somewhere. Yet… you can’t move! Meanwhile you are surrounded by thousands of people thinking and wanting the exact same thing. Courtesy often fails, kindness is forgotten, and all you can think is everyone around you is an idiot. The thought alone can make blood boil.

Now if we know there is construction up ahead, typically we can remain calm. If after waiting we pass the scene of a horrific car wreck, we’re thankful it wasn’t ourselves. If a big sporting event is starting or ending, we understand fan loyalty even though we may not appreciate it. If the weather or road conditions are terrible, than we understand that slow drivers are just being cautious. These reasons behind traffic jams don’t anger us as much because we understand them. It’s what we don’t understand that upsets us. So why do traffic jams occur on the highway when no other factors induce it? When construction is absent, no wrecks have occurred, and the weather is fair, why does traffic on the highway stop-and-go? Shouldn’t it in the least continually move forward?

The answer to that question is yes. Traffic on the highway should continually move forward, but the reason it doesn’t is sadly due to the drivers themselves.

Drivers are to Blame for Highway Traffic James

You reap what you sow. Stop-and-go traffic builds and becomes worse because most drivers are not following the rules. Driving laws are there for a reason and some of them are there, at least in part, to make commuting more reliable and dependable. That is of course so long as most drivers follow them, which they typically don’t.

Speeding and Following Too Closely

If everyone was traveling the same speed would you assume anyone would ever need to slow down prior to pulling onto an off ramp? Without any other factor in play (such as weather or an accident), you wouldn’t ever need to use your brake. This isn’t solely targeting people who drive too slow, driving too fast surprisingly causes traffic jams as well. If you don’t provide enough space to the vehicle in front of you (typically 1 car length for every 10 mph being traveled), when they brake to slow down you must brake harder to ensure you can stop in time. This then means the person behind you must slow down even more, and so on and so forth until further back down the line cars are coming to a complete stop.

By understanding that braking up ahead causes stop and go traffic further back, than you should understand why erratic driving should be frowned upon as well. If someone cuts you off in lane or merges suddenly, you will no doubt have to brake to stay safe. And as we’ve talked about, that creates a chain reaction down the line of cars behind you. Braking is literally the cause of stop-and-go traffic, and people need to brake because they don’t provide enough space to the car in front of them. If they did, and even if a car suddenly merges, there would be enough available space where you wouldn’t have to slam on your brakes.

Could Understanding This Mean an End to Highway Traffic

You would think that since we understand why traffic builds on highways that we should be able to mitigate or manage it better. The problem is engineers and researchers have found solutions to relieving traffic congestion. For instance you’ve no doubt seen stop lights on on-ramps which are supposed to help cars trickle into the traffic stream. Some areas have even taken the expensive steps of widening their highways. But the problem again isn’t our roadways, it’s our drivers. Sadly, there is little we can do about that.

But that does not mean we are out of options, well, at least in the future hopefully. Autonomous vehicles (self-driving and driverless vehicles) along with the future of car-to-car communication (where vehicles can send information to each other) technology are what many people hope to be the cure-all for highway traffic congestion. If you take driving out of the hands of people, computers can generally do a better job of following driving laws, as they have no reason to break them.

If you can imagine that every car on a highway was autonomous and could communicate with each other, there would be fewer accidents, everyone would travel the same speed, sufficient space would be provided to every car, and braking would rarely have to occur. Every vehicle would move as one continuous stream. In fact, it would make our highways seem more like railroads where cars would seemingly be linked together like a train. But this technology is still a ways away from being commonly found, and until then, we have to make do with what we currently have.

So when it comes down to it, we have no one to blame for highway stop-and-go traffic but ourselves. Hopefully in the future, computers will be able to end this problem we seemingly can’t help create. But until this happens, we are all going to have to be a little more patient, provide a little more room, follow a few more rules, and maybe, just maybe, we can get to where we need to be on time and without raging.

The author of this piece was Damien Wilhelmi and writer for AAMCOColorado.com. If you enjoyed this article you can follow me on Twitter @AAMCOColorado. When I’m not writing about why traffic jams occur, I can generally be found writing about other car-related annoyances we must endure and possible solutions to help make life a little easier for all.