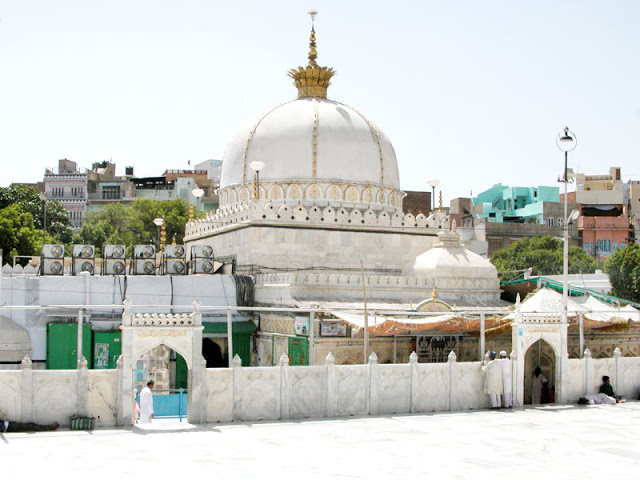 Ajmer is a standout amongst the most famous cities of Rajasthan and a spot considered as one of the best holiday destinations in India. With a bewildering blend of Hinduism and Islam, Ajmer is a delightful mix of various social backgrounds and different customs. Ajmer gloats of its lovely pleasant lakes, museums and various other monumnets. It lies in close proximity with Pushkar which is also a very popular tourist destination. There are many places to visit in Ajmer so without further ado, here are the list of some of the best places you definitely need to see.

Built of fine white marble standing majestically in the inner court of Dargah, this mausoleum is a sight of pure delight and is one of the biggest tourist attractions of Ajmer. As you go along exploring this magnificent piece of historical gem and artistic beauty, you will discover that there is the Akbari masjid and another mosque on the right side of the court yard.

This piece of art standing in all its glory taking the breath away of each onlooker is built and designed in an Indo-Islamic style of architecture. Adhai-din-ka-jhonpra is situated a little further away from the main city and it looks like a mini colosseum from the exterior view.

This museum was the former royal palace of Akbar the Emperor and it now showcases a rich and large array of items from the Mughal era. Items ranging from body armours, weapons and various other delicate paintings and sculptures can be found in this museum making it one of the most visited places in Ajmer.

The Ana Sagar lake was created by Anaji during the 1135-1150 AD. Further modifications were made by some Mughal Emperors which only added more to the beauty of the lake and this lake now is considered a landmark for Ajmer. The gardens and parks near the lake is a very popular outing and picnic spot for people in Ajmer and visitors alike.

Dargah Sharif is the tomb of Khwaja Muin-ud-din Chishti, a sufi saint who arrived from Persia and gave his life serving the poor and downtrodden in Ajmer. What makes this place unique and stand out is the fact that both Hindus and Muslims come together to this place to pay their respect which is not seen anywhere in India. The tomb is in every angle and space magnificent and is a testament of the architectural brilliance of that time.

Ajmer is visited by people from all over in India and especially by people from Hyderabad mainly for its similarity and its association with the monuments and worship places built during the Mughal era. Taking a Hyderabad to Ajmer train will take you about 30 hours of travelling. Ajmer is yet another gem of a place in Rajasthan and a visit to the city is a must for every travel enthusiast.

Dimpy Roy is a travel writer working with an Online Travel Guide. She guides travelers to various resources where they can find best Jaipur to mathura train and choose the best one.