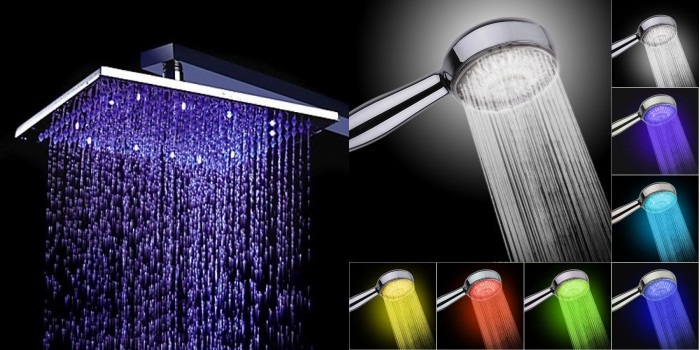 A basic shower head is the most budget type. It is a single unite shower fixed at the right angle. Basic shower heads do not have any special functions, and the water flow decides the force of the water entirely.

If you enjoy the feelings of water falling straight to the ground, the top mount is just for you. This type of shower head is installed on the ceiling of your bathroom, so when you turn it on, water will fall off. Top mount models have some special settings. For example, if you would like a hot shower you can attach it to the hot water line. One big point of this model is they require low pressure. Should the water pressure in your house is not that desirable enough, then you may consider top mount shower head.

LED shower head is not that mysterious, but can tell you the water temperature more visually. An LED color changing shower head has LED light bulbs installed and can display 3 colors at least—red, green and blue. As the name implies, red means the water is hot and green means cold. When the light is blue, it is telling you that the temperature is comfortable. This model is widely applied in many modern families, which leaves good impressions. Worry about electricity bills? Nope, a bathroom LED spray shower does not need power supply or battery. It is powered by a small turbine inside – no extra electricity consumption.