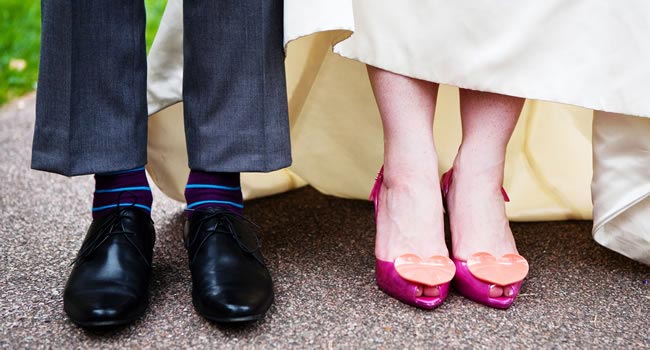 People put on shoes for different reasons. One of the most basic reasons why people put on shoes is to protect their feet. However, shoes are also a fashion statement. There are many types of footwear including cowboy boots and ballerina slippers among others. They all serve specific functions.

Historians believe that ancient men wore sandals fashioned from animal skins or plant fibres. Early Chinese wore shoes made of wooden soles. However, one factor remains constant, ancient people wore shoes as a fashion statement as well as to protect their feet. Early shoe designs were not specific for right or left feet but they were worn on either foot.

Work shoes are meant for the workplace. They help people perform better in their jobs and protect the feet from harmful substances.

Work shoes include heavy construction boots and walking shoes for nurses. Casual and dress shoes make up the majority of the shoes people put on when dressed formally or on a regular basis.

Shoes cover the feet and protect them from harmful substances as well as the elements. The sole is the part that covers the bottom of the shoe. The insole is found in the shoe’s bottom interior. The shoe is supported on the inside by the heel, which is located on the sole’s backside. Some shoes have fasteners while others do not. Fasteners include buttons, Velcro, shoestrings and snaps.

Initially shoes were designed mainly to protect the feet against harmful substances. Today, the concept of protection has been overshadowed by that of fashion. This started as early as during the 1300s in Europe when men wore long-toed shoes known as crackowes.

Men who wore these shoes attached a chain from the sole of the shoes to their knees to prevent tripping.

After the crackowe, women wore shoes that they could not walk in without support. Today, many women still prefer fashion to comfort.

Women’s preferences includes high-heeled shoes, which may not be very comfortable to walk in over long distances.

In the early days, shoes were designed and made by cobblers or shoemakers. With the advent of the industrial revolution, shoe manufacturing moved from individuals to the factory leading to mass production. Today, the shoe manufacturing industry is one of the biggest in the world. Today’s shoe designs range from inexpensive shoes to high-fashion footwear and sports shoes.

The Ugly Side of Wearing Shoes – The Odour

Sweat is composed of various fluids including urea, salts and fatty acids. Sweat promotes the reproduction of microorganisms naturally present on the skin. The microorganisms continue growing provided the right conditions are maintained. Shoe odour is inevitable if shoe wearers do not keep the growth of these bacteria in check.

To prevent shoe odour, avoid shoes made from vinyl or other synthetic products because they do not allow adequate airflow. In addition, do not put on shoes without wearing socks. The main reason why people put on socks is because they absorb sweat and keeps the insole and lining from getting dump.

Charlene Anderson works for Pizazz Online. When she’s not thinking about shoes she’s usually in the gym making sure she can still fit into all of her clothes.