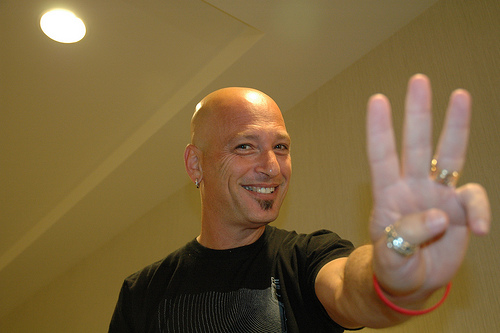 Television personality, Howie Mandel, is advocating for mental health. He believes that the health care system in the United States is overlooking a true need, and he wants to be part of the change. With the use of his own childhood story, Mandel is calling for a greater focus on mental health.

Howie is sharing his own struggles to show just how important mental health care is for everyone in the U.S. As a young boy, Mandel was teased often for things he could not control. While speaking out, he discloses that, what was later diagnosed as Obsessive-Compulsive Disorder (OCD), kept him from having a “normal” childhood. When his shoelaces would come untied, for example, young Howie would not retie them because he was fearful of the dirt and germs picked up from the ground. Other kids teased him, which led to major feelings of isolation.

In addition to OCD, Howie Mandel later learned that part of his childhood struggles can be attributed to Attention-Deficit Hyperactivity Disorder (ADHD), but when he was young, he “didn’t know that these things even existed.” His words to Erin Burnett at CNN illustrate similar difficulties of countless young people in the United States. Mandal has also suffered from depression at various times in his life as well.

Howie Mandel believes that, had he been exposed to mental health services during those years, he would have had a very different childhood. With appropriate identification of the problem, diagnosis, and treatment, Howie could have worked through his fears that instead spiraled and progressively got worse.

Rates of Mental Illness in the United States

The National Institute of Mental Health (NIMH) estimates that 26.2% of all U.S. adults, aged 18 and over, have lived with a diagnosable mental illness at some point in their lives. This means that somewhere around 60 million Americans are experiencing the symptoms of depression, or another mood disorder, anxiety, an eating disorder, autism, schizophrenia, Bipolar Disorder, OCD, Post-Traumatic Stress Disorder, or a personality disorder, like Borderline Personality Disorder, without proper care.

Instead, a system that evaluates mental health, much like semi-annual medical and dental checkups, could serve to identify mental illness at its earliest stages, allowing for early care, as doctors do for cancer and other diseases.

Howie Mandel wants to see mental health services, like counseling, integrated in the same way as other forms of healthcare in this country. As he told CNN, parents take their children in for routine pediatrician and dental visits at least annually, if not more, so why is mental health care not also recognized as an ongoing need for prevention, assessment, and care?

In his words, “We are so behind in the world as to not have something in place that just teaches everyone how to cope.” The problem, Mandel says, is the stigma of mental illness that still exists in the United States. Being depressed, having anxiety, or dealing with OCD, or any other mental illness, is still primary viewed as a weakness of character by decision-makers.

Howie Hoping For A Change In Attitude

Howie wants to help change this attitude. He believes that young people need to be assessed for mental illness, and that an overall system of ongoing mental health monitorization needs to be implemented to benefit every single American citizen, through every stage of their growth.

Subsequently, Howie Mandel is speaking out as an example for children who are growing up without an understanding of what they are experiencing mentally, psychologically, and emotionally. He hopes for a greater focus on mental health in this country, and will continue as an advocate for his cause.