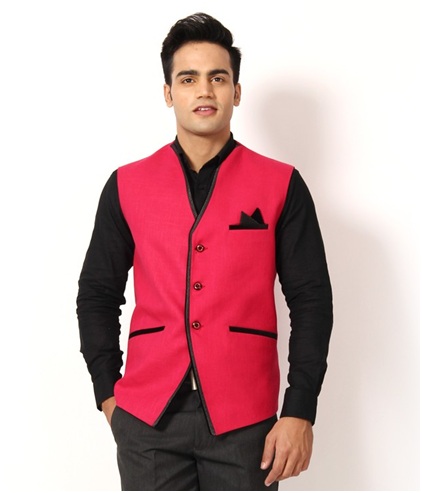 The Nehru jacket is a very popular cloth in Asia especially in India and Pakistan. This jacket is named after the first prime minister of India Pundit Jawaharlal Nehru which played an important role in India’s independence. This jacket is just a like a normal jacket but the part that makes it different is its mandarin collar. This collar originated from a court dress in India. The collar is short and firm and therefore it does not get turned down easily and therefore it always looks new and neat. The collar is named after the mandarins in China and its design is a combination of traditional Indian menswear and British tailoring techniques and styles. This combination made the Nehru jacket very exotic and elegant and therefore it became every Indian man’s staple.

This jacket is similar top a normal suit jacket apart from its mandarin collar. Its designs are different but generally a Nehru jackethas a single or double vent and a collar that is fastened using a hook to give it a neat and clean look. Most Indian men wear the Nehru jacket with matching pants even though it can also bepaired with other pants like jeans trousers. This jacket covers the whole upper body and does not show the shirt worn inside and therefore it is recommended to be worn with a shirt with no collar.

India has had a lot ofwestern cultural influence dir to invasion by foreigners from time to time and therefore it is hard to place the exact time that the jacket came into existence. However, it is believed that the firstgarment to be seen in India that looks like a Nehru jacket was seen in the 10th century. These garments seen during this time were not jackets but they looked like shirts. It is these shirts that gave birth to the famous Nehru jacket. These shirts were sampled and redesigned to make this jacket. There were several garments resembling the Nehru jacket built it was not until the 1940s that the first original Nehru jacket surfaced and it was referred to as a closed jacket inIndia.There was a great similarity between the jacket and the sherwani and therefore the name probably came up to differentiate the two.