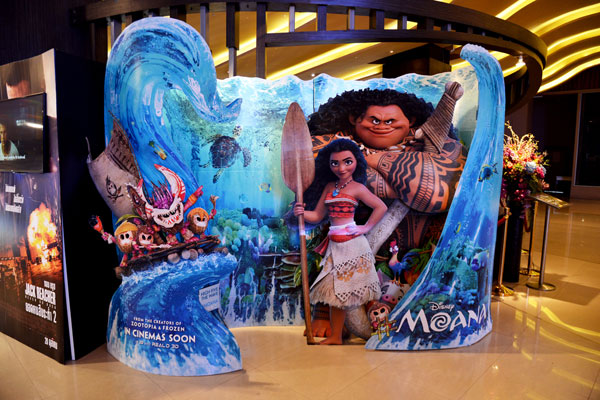 It’s all about movies in the entertainment headlines as the weekend box office has featured a tight race with the hit Disney release Moana barely holding on to the top spot. Raking in $18.8 million, the animated film held on to the number one spot for the third consecutive week. This brings the total earnings from the adventure feature to $145 million since it opened on the big screen over Thanksgiving. The overseas gross for the hit movie over the week has been $23.5 million bringing the worldwide total to a solid $238.8 million.

However, Moana is most likely spending its last weekend at No.1 factoring in the long-awaited launch of Rogue One: A Star Wars Story. The science fiction film, which had a budget of $200 million, is expected to be the second most successful movie among the December releases. Estimates of the earnings from the movie are expected to hit the $130 million mark within North America.

As for the current situation at the box office though, Moana continues to enjoy a slim victory over the newly released Office Christmas Party. Coming in second place, the season-themed comedy has raked in $17.5 million over the week domestically. The movie’s overseas earnings since the release date has been $16.3 million bringing the worldwide gross earnings to $33.9 million. The budget involved in making the film came to $45 million meaning that it was expensive to create the movie although it will most likely make money back.

The Harry Porter spin-off titled Fantastic Beasts and Where to find them came in third at the box office after earning $10.8 million from the North American viewership. The domestic total earned from the film is currently expected to pass the $200 million thresholds through the holiday season when it’s all about movies.

Even though Moana has held on to the top spot for three weeks currently, the Damien Chazelle musical La La Land has been the catchy flick that has kept audiences singing. The film has played in five theaters only and the gross earnings to date stand at a staggering $855,000 based on estimates by the film’s studio, Lionsgate. This has followed the well-written reviews of the musical feature and that its average is currently at $171,000 per theater which is at an all-time high considering the release in five theaters.

Exit polls indicate that 52 percent of the audiences were female viewers while those aged thirty and above were 53 percent of the viewership. Lionsgate’s President in charge of theatrical distribution within the domestic market, David Spitz, is on record saying that despite having a feeling that the film’s opening would be strong they had not predicted such big results for the movie.

The reported cost of making the movie is $30 million, and the hype has been growing all through fall since the premiere during the Venice Film Festival. Critics and audiences have also continued to be wowed by the film at various festivals that it has featured. Also, there are major awards that it has gone on to claim including being picked as best picture at the New York Film Critics Circle. Following this accomplishment, this film seems like it will be a contender for major awards with expectations of nominations at the Golden Globes awards. All in all, the movie has enjoyed a great boost and a nod from major awards would give it a mainstream advantage.

The main stars in the film are Ryan Gosling and Emma Stone and it is expected to expand to another two hundred locations in the coming week.

Arrival, a science fiction picture by Jeremy Renner and Amy Adams has been the fourth place with earnings of $5.6 million and the fifth place at the box office was taken by Doctor Strange. The latter is a release by Disney in conjunction with comic book films creators Marvel. Domestic earnings by Doctor Strange over the week have been at $4.6 million.

It has, however, been a fizzling period for Miss Sloan following its promising start at the box office. The Jessica Chastain thriller has raked in $1.9 million from the 1,648 locations that it has been featured.

Based on predictions, Moana is most likely to be dislodged from the top spot by Rogue One. However, the slow past three weeks have made it hard to be certain on how the coming days will be. But only time will tell whether the Star Wars Story will shake things up at the box office as widely expected.