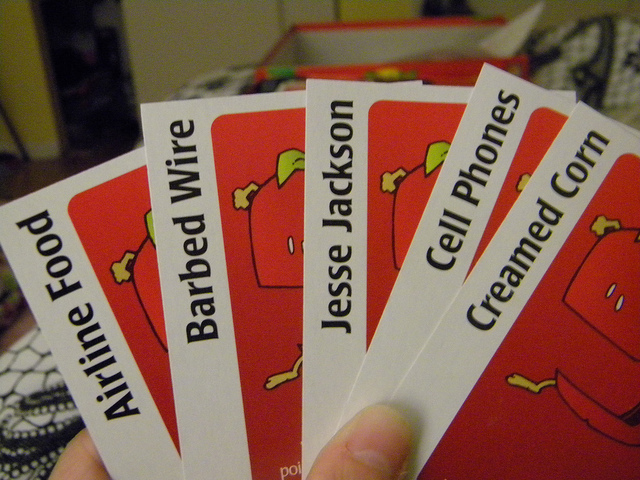 Apples to Apples: A Must Play Party Game

When you were a kid, parties were simple. Grab some sodas, maybe a cake, some snacks and a couple of board games and just like that, you’ve got yourself a successful party. The problem sometimes with getting older is that we over complicate things and have trouble appreciating the little things like we used to. However, certain things can take us back to simpler times yet still let us be adults. Apples to Apples is one of those things. From the very first time anyone plays this simple but incredibly fun game it instantly takes you back and makes you feel like a kid again. Board games are rising in popularity again even with all of the new technology we have, and Apples to Apples is one of the best times you can have at a party. Here is why.

There is nothing worse than getting a big group of people together and trying to explain an overly complicated game to them. Sorting through all of the complex rules, game pieces and even just trying to make room for everyone to crowd around the board can be a hassle. The complication is likely why people just don’t play games at parties as adults. Apples to Apples completely solves this problem by being absurdly simplistic. In a nutshell, one person plays a green card which typically has a noun of some sort on it. That person becomes the judge. Then, all of the other people play a red card from their hand, typically an adjective of sorts that is used to describe the noun on the green card. The judge then shuffles the cards and picks a winner. The winner takes the green card as a way to keep score. It’s that easy. It completely simplifies things but is arguably more fun than games such as Monopoly that require a lot of moving parts.

One might first look at Apples to Apples and think to themselves “how could a game with two decks of cards be worth playing?” Perhaps a valid question. The genius of the game is comparable to that of Mad libs. It’s all about plays on words and the makers of the game designed the words so well that the combinations are so vast and so diverse that it never gets old. For instance, a real green card in the game reads Anne Frank. When that is played, it is possible your friends could play red cards that read “dead” or “senseless.” At times inappropriate and others disturbingly accurate. The best part is that playing with a group often times inside jokes or other intricacies can play in as well making it unique to everyone who plays.

Another indicator is the borderline universal praise of the game. Not to say that everyone has to agree with critics, but it’s not just critics these days. Consumer reviews allow people go see what actual consumers of the product feel about it. For Apples to Apples specifically, it has been reviewed nearly 200 times on Amazon. Of which, only 3 reviews have been negative and more than 150 of them were five-star. Enough said.